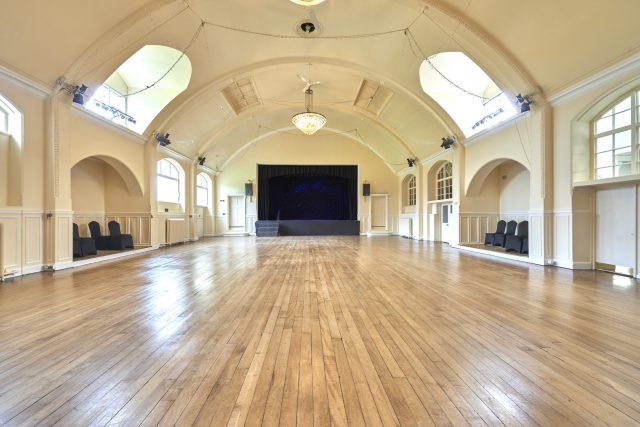 A new live event venue for the North West has been launched – and is ready to welcome audiences and visitors this Summer as soon as lockdown restrictions have been lifted.

The Bowdon Rooms in Altrincham, Cheshire, was already established on the live entertainment circuit. But since being taken over by new owners 12 months ago, like many other venues it has remained closed to the public.

The team seized the opportunity and embarked on an extensive refurbishment – and now the Grade II Listed venue is set to further establish itself as a real asset within the region’s live event scene.

The venue’s opening programme for Summer 2021 is brimming with high-profile entertainers from music, comedy and dance.

At the helm of The Bowdon Rooms are Cheshire-based brothers Anthony and Edward Prophet, who took over the venue in March 2020 just two weeks before the first Covid-19 national lockdown.

Now the vaccination programme has been rolled out and the Government has announced a roadmap for easing lockdown restrictions, the Prophet brothers are now delighted to formally announce the relaunch of The Bowdon Rooms and their exciting plans for 2021 and beyond.

The full programme is available online at the venue’s new website – www.thebowdonrooms.co.uk where visitors can also sign up to receive the latest news and announcements direct through a newsletter. A new dedicated booking website has also been launched at www.bowdontickets.co.uk

Dating back to 1903, The Bowdon Rooms boasts striking Edwardian architecture and authentic character. With more than 125 years of history, charm and grandeur, the venue also offers four conference and event spaces to accommodate groups – from the intimate lounge area to the impressive ballroom. The Bowdon Rooms is also a fully licensed wedding venue.

Anthony and Edward Prophet bring a wealth of events, production and hospitality experience to lead a creatively strong team at The Bowdon Rooms.

Anthony’s background is predominantly in events and hospitality, having worked across the UK and internationally on a range of large events. He was based in Dubai for almost a decade, with career highlights including working alongside Phil Collins and Shakira, and launching world-class motorsport events throughout the Middle East and North Africa region.

Anthony commented: “Like many live event venues, it’s been a very challenging 12 months. Within days of taking over the lease, we found ourselves under the constraints of the first national lockdown – not the start we had envisaged. However, instead of productions taking place on the stage, we took the opportunity to be productive behind the scenes to ensure we are ready to welcome guests back to The Bowdon Rooms once it’s safe and we are allowed to do so.

“Our mission is to realise the full and true potential of The Bowdon Rooms, appreciate its history and character, and showcase just how special the venue really is. We have refurbished all public spaces and completed a technical upgrade of the stage, sound and lighting equipment – making the venue one of the most technically advanced in the area. Having being born and raised locally, we are proud to further grow our roots and give something back to our local community.”

Edward is a trained actor in musical theatre and has worked in the hospitality industry across the world. His passion for live performance led Edward to start producing musicals in 2020, and he was nominated for two best musical productions in the Off West End Awards – scooping an award for his production of The Last Five Years in association with Aria Entertainment.

Edward added: “We are thrilled and delighted to announce this exciting new-look venue for the local community, Altrincham, and the North West. We’ve not yet opened our doors in this time of the ‘new normal’, yet after lots of hard work we’re most definitely on the live event radar, already attracting high-profile performers and national touring shows. We are ushering in a new era of events at The Bowdon Rooms – and we look forward to welcoming visitors very soon.”

Another unique event is Allo Allo! Audiences will experience their own first-hand experience of the hit television comedy featuring some of the original TV cast. The show includes dinner of French cuisine, replica sets, audience Q&A, and iconic scenes will be recreated.

The Bowdon Rooms neighbours Saint Mary’s Church in the parish of Bowdon, which is featured in the Doomsday Book.

Famous faces who have previously tread The Bowdon Rooms’ boards include Rowan Atkinson and Victoria Wood.

Rowan Atkinson famously made his first public performance as Mr Bean on stage at The Bowdon Rooms following performances at the Edinburgh Fringe. Victoria Wood enjoyed performing there so much in the 1980s, that the venue was chosen as the backdrop for her directorial film debut of That Day We Sang starring Michael Ball and Imelda Staunton in 2014.