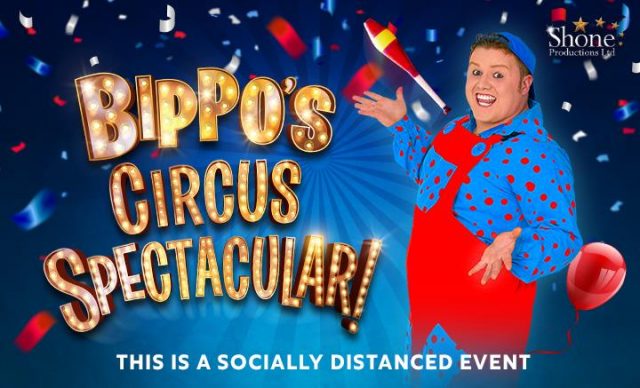 Audiences are being invited to run away to the circus this weekend when Shone Productions brings big top magic to The Auditorium at the M&S Bank Arena.

Now he returns with this fantastic circus-style variety show where he appears alongside a host of top-class artistes who promise to thrill and entertain onlookers with their amazing skills and talent.

And there is also a chance for the audience to get involved in the fun, with the ‘what’s next?’ part of the live show giving people a say in what they want to see – while the performers battle it out to win the audience vote.

The madcap mayhem comes to a climax with a ‘slosh’ style finale. But don’t worry if you are on a front row, waterproofs will be provided!

Bippo the Clown has been a favourite on stage and screen for 20 years, appearing in circuses, theatres and on television.

Along with his circus clowning, he is also a panto regular and in addition to Sleeping Beauty his credits at the Auditorium include Silly Billy in Jack and the Beanstalk, Muddles in Snow White and Smee in Peter Pan.

Producer James Shone says: “The Circus Spectacular is our third show in the Auditorium at the M&S Bank Arena this summer, following X-treme Magic and our wonderful pantomime Sleeping Beauty.

“Bippo was a massive hit with panto audiences over the half term break last week, and I know people are going to absolutely love his fantastic circus show too. As well as Bippo himself, it’s packed with great performances from some of the most talented performers around.

“The Auditorium is a brilliant venue and we’ve had great feedback from audiences who are really pleased to be able to enjoy live entertainment again after what has been an incredibly difficult 15 months for everyone.”

Bippo added: “I’ve really missed sharing the joy of live performance with all you Bipsters out there.

“The arts are coming back, and the time to have a live entertainment experience is now. Never has it been more important for the morale of the country.

“We had a fabulous week bringing the story of Sleeping Beauty to family audiences, and now I’m looking forward to some more magical mayhem, this time with my Circus Spectacular.”

The Circus Spectacular will be staged in a Covid-safe space which includes reduced seating capacity to allow social distancing, a one-way system around the venue, hand sanitiser stations and deep cleaning between each performance.

There is a £2.55 fulfilment fee per order