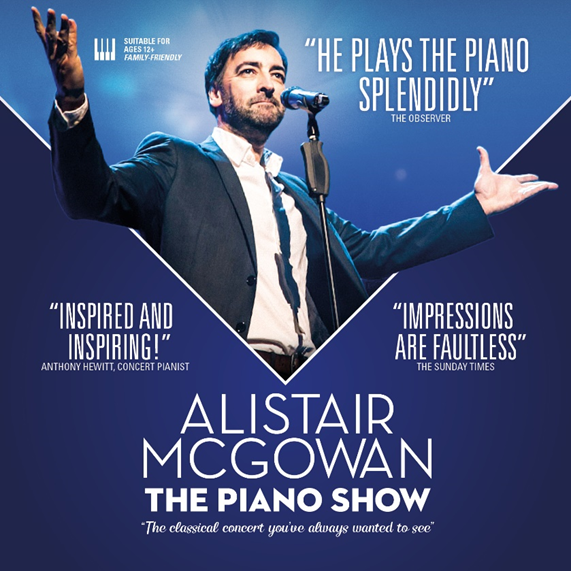 Master impressionist Alistair McGowan is embarking on a brand new tour during Spring 2022 which combines his incredible comedy talents with his new-found passion for classical piano music.

After 25 award-winning years in the world of comedy, Alistair McGowan began playing the piano in 2015. Within two years, he had released Alistair McGowan: The Piano Album through Sony Classical which topped the UK Classical album charts and reached No 2 in the Classic FM chart. The album featured 17 short piano pieces by composers including Satie, Chopin, Field, Grieg, Schuman, Liszt, and Glass.

Since 2018, Alistair has been playing the piano publicly to great acclaim (despite the odd mistake!), and his move from comedy at the highest level into the world of classical piano is unparalleled. He thinks he is the first person to mix stand-up comedy with straight classical music in a live setting.

Without training as a musician, his ability to perform in public under pressure and then to slickly mix the music with his stand-up routines and endlessly changing roster of impressions of zeitgeist celebrities is truly impressive, sets him apart – and makes for a very entertaining evening which Alistair describes: “Two shows in one. It shouldn’t really work but, I’m repeatedly told, it does – thankfully. Audiences even seem to enjoy my mistakes, I don’t!”

Alistair studied piano for two years as a boy but gave it up in favour of football and tennis.

He began working as a stand-up comedian in 1989 and soon found work on radio and television as well as taking shows to the Edinburgh Festival including When Harry Met Ally with Harry Hill in 1991. His own television series eventually followed in 1999 and, over four years, The Big Impression became one of BBC One’s most highly-rated comedy programmes, winning a BAFTA in 2002.

He has also worked on television as an actor in programmes such as Mayo and Bleak House and in the film Driving Aphrodite with Richard Dreyfuss. On stage, he has twice played Henry Higgins in Pygmalion, twice played The Mikado, and was nominated for an Olivier Award for his performance as the Dentist in Little Shop of Horrors in the West End, alongside Sheridan Smith. He has also written three biographical plays for Radio 4 about George Bernard Shaw and the composers, Erik Satie and John Field.

Alistair McGowan – The Piano Show demonstrates and showcases his love of all the art forms that have gripped him during his rich and varied career. And, in its two previous incarnations, he has introduced a new audience to short, classical piano pieces from composers including Cyril Scott, Yann Tiersen and Madeleine Dring, and has surprised classical music lovers by delivering – between the pieces – his impressions of Harry Kane, Raymond Blanc, and Roger Federer.

The 57-year-old says: “Rediscovering the piano as an adult has been a great joy to me, and being able to share that joy with others is both a privilege and a huge pleasure – although I continue to be in total awe of trained pianists who can play far more intricate pieces than I could ever attempt.”

“After having to reschedule the tour due to the pandemic, I’m very much looking forward to this new tour and if it encourages someone else to follow their own dream, whatever their age, then that’s even better.”

Alistair has received plaudits from several classical musicians for the quality of his playing reminding us all that it is never too late to try to attempt what you love and what you and others may think is impossible.

WHAT THE CRITICS SAY ABOUT ALISTAIR MCGOWAN

“Two shows for the price of one: laugh-out-loud comedy and some surprisingly sensitive piano playing”