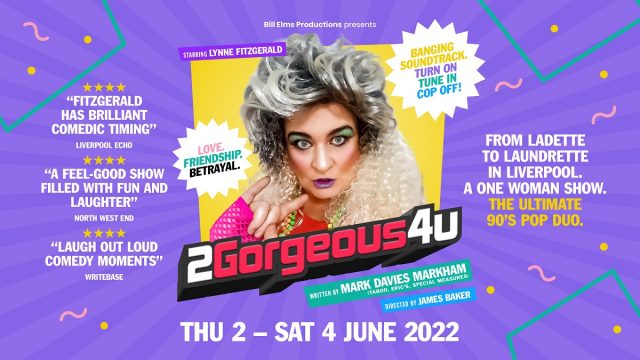 An unmissable one-woman show by acclaimed playwright Mark Davies Markham is returning to the Liverpool stage this summer after winning rave reviews from audiences and critics alike.

Comedy 2Gorgeous4U – From Ladette To Laundrette will be at the Royal Court Studio from Thursday, 2 June to Saturday, 4 June.

It promises audiences an evening packed with laughter, throw backs to the Nineties and a soundtrack guaranteed to bring back memories of the decade.

Clare is a beautician with her own spa and treatment room in Waterloo. Happily single, she is online just in case. Her one desire in life is a wet room.

But back in the Britpop 1990s, Clare was one half of a pop duo 2Gorgeous4U with her best mate Tina. They were wild – but fell out acrimoniously.

Now they have been asked to reform for a music festival in their hometown of Liverpool. But can they put the past behind them and move on – and what was it all about anyway? All set against a musical soundtrack featuring Queen Latifa, Blur, Gabrielle, K-Klass, and plenty more.

Lynne Fitzgerald plays no fewer than 10 different roles in the show which is being presented by Bill Elms Productions.

Bootle-born Mark Davies Markham was first praised for his writing ability by teacher Mrs Huntington after he penned a short story at Bedford Road Primary School – and thanks to her encouragement he’s been writing ever since.

Mark performed poetry at Left Bank Bistro with musicians, and his first play was Are You Awake for Liverpool Lunchtime Theatre above Chaucer’s Tavern, all while still a care worker for Mencap in North Wales.

He trained to be a teacher, juggling his writing and teaching for eight years before going professional. He won a young playwright’s competition for BBC Radio 4 in 1990, which was Sony nominated, and has since written more than 20 plays for them including Just A Girl (series one to five); The Liberty of Norton Folgate with Madness; and Goose Breath recorded on location in Liverpool.

He has also written for EastEnders; This Life (Writers Guild series award); Band Of Gold; and The Liverpool Nativity Live on BBC3 (Czech TV Prize).

Theatre credits include Eric’s at the Everyman; the UK version of Taboo with Boy George (Olivier and What’s On Stage awards); and Special Measures at Liverpool’s Royal Court.

Lynne Fitzgerald is an actor, director, comedian and playwright. Her acting credits include Two – playing opposite Louis Emerick, The Salon at Liverpool’s Royal Court and St Helens Theatre Royal, and Bunty the Bouncer. Her plays include Psychic Sybil, Desperate Scousewives and Show Us Your Tips.

2Gorgeous4U writer Mark Davies Markham said: “The play had a great reception when it opened the Liverpool Theatre Festival last summer, so I’m really pleased it’s heading back to the stage – this time at the brilliant Royal Court where I previously premiered my Ofsted play Special Measures.

“There’s nothing quite like the reaction of a Liverpool crowd, and I’m sure audiences at the Royal Court Studio are going to love Lynne’s fantastic performance just as much as festivalgoers did when she brought Clare to life at St Luke’s Bombed Out Church.”