Bridget, who joined the Trust in May this year, is believed to be the first NHS-funded IDVA to assist victims of domestic abuse.

And since she started in post, Bridget has helped both staff and patients across all seven of WWL’s sites.

Linda Salt, Head of Safeguarding said: “Other hospitals have had the use of IDVA services who have been seconded to work in hospitals using various community based models of work.

“However, the WWL IDVA operates on a hospital type ‘triage and make safe’ model which has been found to be the most suited to a hospital environment.

“We believe that Bridget’s role is the first of its kind in the country – and since Bridget has joined the trust, she has received a substantial number of referrals and helped victims to remain safe.”

Bridget’s position is the result of a joint pilot scheme with Wigan Council that identified that WWL patients and staff who are victims of domestic abuse would benefit if they could be provided with a rapid response regarding domestic abuse, within the hospital environment.

The aim is to keep patients safe, reduce repeat incidents and injuries therefore reduce repeat presentations to hospital, which will also help the community of Wigan where incidents of domestic abuse is above the national average.

Bridget, began her career in housing where she was the only female in her team who picked up domestic abuse cases.

Following redundancy in 2011 Bridget then went on to work with Citizen’s Advice to be a trainee IDVA and trained to be a service manager in 2014 before being seconded into a Victim Support funded post by Lancashire’s Police Crime Commissioner.

“The only time I actually had any work within the NHS was when I set up a drop-in clinic at Chorley A&E on a Friday morning,” says Bridget, “so to now be working directly within a hospital setting is just going to help more and people who are victims of domestic violence.

“I also now work with a solicitor from a firm in Bolton who provides legal advice to any of the people I look after.”

In the first quarter (three months) of being at WWL, Bridget has seen 89 – and more men than the national average.

“The national average for domestic abuse cases involving male victims is eight per cent, in Wigan, the average is 16 per cent,” says Bridget.

“A lot of the time, the men I see are professional men who slip through the net, they’re not known to social services or the police and they’re the ones that are often in need of the most help.”

Bridget adds; “Other hospital trusts have enquired as to how Linda secured the funding for my position and now they’re looking into ways they can have their own IDVA at the hospital”

And throughout her career Bridget, who also received the Police Commander’s Award from Lancashire Police in 2016 for her work, has assisted many cases in court and has even helped to get one man convicted and sentenced to life imprisonment.

“I can do what I can do but, the volume of work has been higher than anticipated,” Bridget says.

“But I’m only doing what I would want anyone to do for my mum, sister, brother or daughter if they found themselves in that position.” 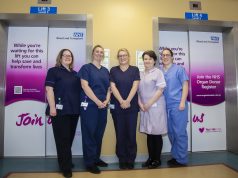 Giving a good cause a lift 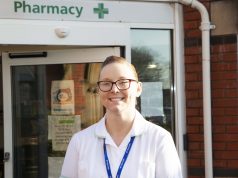