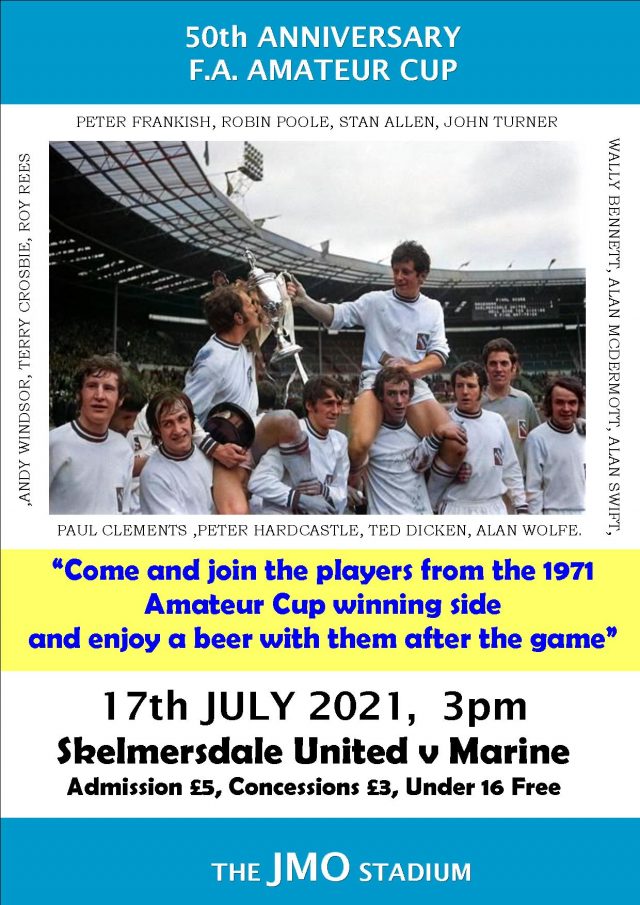 Players will be in attendance v Marine on 17th July

As part of United’s Pre-season schedule to celebrate the much delayed event, Marine FC will be the visitors to the JMO on the day.

The game kicks off at 3pm, Admission £5, Concessions £3, Under 16’s Free. Everyone is welcome to join the players after the game in the JMO Sports bar, so come along and enjoy their company.

April 24th 1971 was the day the boys kitted out in white ran out at the famous old Wembley Stadium, lead by Manager Roy Rees and skipper John Turner the United side turned over Dagenham 4-1 thanks to a hat trick from Ted Dicken.

On the way to the Twin Towers in 71, they had seen off the challenge of Spennymoor, Sutton Coldfield, Tow Law, Wycombe Wanders and Leatherhead in a mudbath of a Semi Final at Bolton.

On the day we pay our respects to all the lads that won the most famous of trophies and to those that put Skelmersdale on the footballing map in 1967. Some of the players and management maybe no longer with us, but we will show them all the respect they deserve.

The players will walk out before the current United side take on Marine. Please put your hands together and give these United heroes a reception to be proud of.

The first Saturday of the season, sees United without a game but will entertain Longridge Town on Tuesday 3rd August, Kick off 8pm at the JMO.

Admission to League Fixtures will be £6, £4 and Children Under 16 Free