The TUC’s campaign to protect terminally ill workers will today (Wednesday) take to the road.

The Dying to Work campaign will begin its national roadshow at the TUC Congress in Brighton.

It will then visit a number of hospitals after NHS employers lent their support to the campaign in July. The tour’s final stop will be Labour Party Conference later this month.

The Dying to Work campaign is seeking greater security for terminally ill workers to ensure they cannot be dismissed as a result of their condition.

The campaign launched in 2016 following the case of Jacci Woodcook, an area sales manager from Derbyshire, who was forced out of her job after being diagnosed with terminal breast cancer.

The TUC is asking employers to sign up to its voluntary charter to stop cases like Jacci’s happening in the future.

The campaign’s charter is supported by a number of well-known employers, such as Rolls Royce, Royal Mail and Lloyds Bank.

The NHS employs around 1.4million workers and the campaign are confident that all NHS employers will now sign the Charter.

“Your job should be the least of your worries when you get a terminal diagnosis.

“We are delighted that we have over a million workers covered by the TUC Dying to Work Charter and the support of the NHS Social Partnership Forum means we hope to be able to add the entirety of the NHS workforce to this total over the coming months.

“That’s why we are taking this tour around the country. Our NHS is there for us when we need it, and thanks to NHS employers and unions working together, we are proud that that NHS will be there for its workforce at all times.”

Women on frontline feeling pressures at work and home during pandemic, says UNISON 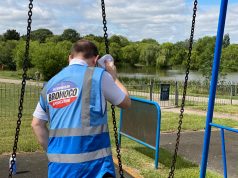