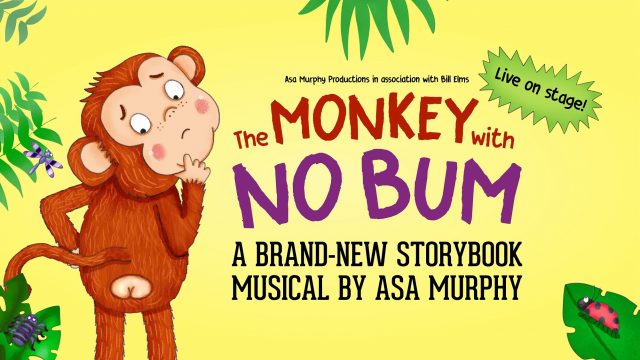 A popular children’s book which teaches youngsters to love themselves just the way they are, has been turned into a live musical for the stage.

And Asa Murphy’s charming tale The Monkey With No Bum – The Musical is set to entertain young audiences and their families at venues across the Liverpool City Region this spring and summer.

The show, which features catchy original songs, enjoyed sold out success when it was premiered at Liverpool Theatre Festival’s Little LTF festival of new works last July – with an extra date added due to demand, and then went on to entertain Epstein Theatre audiences during February half-term.

Now the interactive production returns for a series of special dates with a brand new cast, starting at the Gladstone Theatre in Port Sunlight on Sunday, 24 April.

It will go on to be staged at The Brindley at Runcorn on 16 July before returning to the Epstein Theatre on 17 July, with more dates to be announced.

Charlie is a fun-loving monkey, but he has one big problem – he hates his tiny flat bum. Things take an unexpected turn on his birthday when Charlie’s parents help him find the bum of his dreams. But he soon learns having a bigger, better bum may not be as important as he thinks.

The live stage show includes numbers like The Laughter Song, Perfect in Every Way and The Bum Bum Song.

Asa Murphy says: “The Monkey With No Bum came from a story I told my son when he was small. I wrote the book during lockdown, and it turned into a huge success – the message of all children being perfect in every way has been really well received.

“The book is now used as a teaching aid, and I love going into schools to read and discuss it with the children. I created the musical because I wanted to get the message across to as many families as possible.

“I’ve been blown away by the reaction from audiences who have seen the live musical on stage so far, and I can’t wait to bring the show to Port Sunlight and Runcorn as well as returning to the Epstein Theatre this summer. We have big plans so look out for a bigger tour coming soon.”

THE MONKEY WITH NO BUM – THE MUSICAL