He tried the handle and the door was locked. But of course it was. It was the middle of the night after all. He shivered and made his way around to the back of the house. His limbs felt awfully stiff, leaden almost, and yet there was no pain. But how had he come to be out in the front garden? The last thing he could remember was retiring to bed after his cocoa. He had snuggled up against Edna and had fallen into a dreamless slumber.

A bright, silver moon shone from an almost clear sky and stars glittered in the back drop of night like scattered diamonds on black velvet. The slight breeze that played about the garden was balmy as it kissed his skin. He stopped a few feet from the front door and surveyed his front garden. Perhaps it was a trick of the moonlight and the shadows but his garden seemed. . .different, somehow. A puzzled frown creased his features as he tried to comprehend what it was that bothered him.

He had always been a very keen gardener and both the back and front lawns of the house had been his passion for as long as he could remember. But the privet hedges which he normally kept immaculately trimmed, seemed taller and more untidy than they had in the day. The lawn with its ruler edge borders and finely turned flower beds, were different too. Instead of the golf green height and texture that he worked tirelessly to keep, the grass seemed taller now and he stared aghast at the weeds that had crept in between his beautiful Tam ‘O’ Shanters and Skylarks. The rose plants themselves seemed wilder than he remembered, as if he hadn’t kept them pruned. But that was ridiculous. Stepping onto the lawn, he was horrified to see that the weeds, along with the odd crisp packet, had also invaded his beloved rockery.

Making his way down the side of the house, he winced as he pushed open the side gate. It screeched mournfully as it moved. Why on earth did it do that? He asked himself mentally. Didn’t he always keep the damned thing oiled? Leaving it open so it wouldn’t screech again, he crossed to the back door. The glass porch door swung open but relief was short lived for the back door was locked tight. Now what was he to do? He was loath to start banging on the door to awaken Edna. What would the neighbours say? And why now, for the first time in his sixty three years, had he decided to sleepwalk? And why was he dressed in his best suit?

Glancing up at his bedroom window he saw the faint glow of the night light that Edna kept on her bedside table. She must have awakened for a drink of water or something. Marvellous. In a moment she’ll realise I’m not beside her, he thought, and come and look for me. He hurried around to the front door again, just in case she was peering out of it at this exact moment. When she wasn’t, he made his way to the back again. Seconds dragged into long minutes as he waited and watched for any sign of the kitchen and living room lights flickering on to denote her presence in the house.

After what seemed an eternity, he decided that his wife wasn’t coming down stairs.

Suddenly and idea came to him. He just prayed that he wouldn’t break his neck when he put it into action. He would go to the shed and get the ladder, lean it up against the wall, climb it and tap gently on the window to attract Edna’s attention.

Again he was struck by how untidy the garden was. Like the front, it appeared overgrown and weed ravaged. Even the wood of the shed looked warped but it was only a couple of months ago he had coated it with creosote. And, one of the windows had been broken. When on earth had that happened? It had been fine when he had gone to bed that night.

The ladder had been laid on its side along the shed. Another thing that puzzled him for he always kept it inside. He dismissed the enigma for the moment, his priority now, to just get back to bed. Having placed the ladder against the wall, he began to climb at a slow, steady pace. Within moments he was staring at the sleeping form of his wife as she faced the window, the night light still on.

He was struck by her beauty as he gazed at her gentle features. They had been married for just over forty five years and his love for her had never diminished, nor, as far as he was concerned, had her looks. Longing to call out to her but not wanting to frighten her he settled for a gentle tap on the glass. She shifted restlessly. He tapped again, this time a little louder. She shifted once more and this time her eyes opened. He waved at her and the action caught her attention.

A puzzled expression clouded her beautiful features and he grinned apologetically. He saw her eyes open wide and her mouth gape as an ear splitting scream erupted. It seemed to go on and on as her body became as rigid as a board.

He tried to shush her without shouting, flapping his hands dementedly but the screech continued. He tried to tell her it was only him and not a burglar but her eyes continued to bulge madly as she clutched at her chest. Leaning back, he caught his reflection in the window and his memory came flooding back in an instant. He had gone to bed with Edna, just as he had remembered, but he had not woke up and, judging from his appearance, it had been quite a while ago. His eyes were now two cavernous holes in a ravaged face and the flesh, what was left of it, was spoiled and rotten, hanging from the bone in tattered strips. His rotting heart filled with pain and sadness. He faded slowly from view, melting into the night, to leave an empty ladder leaning against the wall. 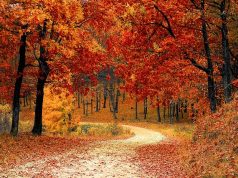 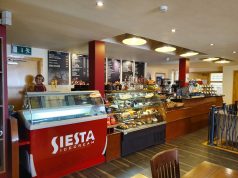