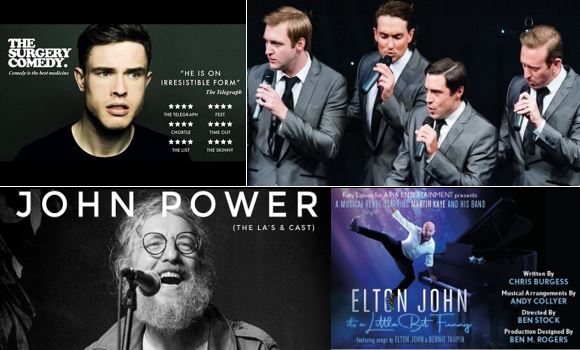 Audiences have been bowled over by The Bowdon Rooms in Altrincham which has launched its inaugural season packed with star names and amazing entertainment.

Cheshire’s newest live event venue – set in a stunning Edwardian building – opened its doors two weeks ago after the latest lifting of restrictions under the Covid roadmap, giving indoor performance spaces in England the go ahead to reopen.

And early visitors have been singing the praises of the spectacular entertainment space, with people highlighting the warm welcome and great atmosphere.

The Bowdon Rooms opened in May with sold-out shows by I Am Kloot frontman John Bramwell, and its inaugural summer season continues this month when The Faulty Towers Dining Experience hosts two memorable sold-out Father’s Day meals at the venue.

And then comedy takes centre stage on July 15 when TV favourite, actor, writer, radio host and podcast star Ed Gamble headlines a night of big laughs at the venue.

The Bowdon Rooms’ busy music programme continues on July 16 with a visit from top Four Seasons’ tribute Walk Like a Man.

It is the ultimate celebration of the band who took the charts by storm during America’s rock ‘n’ roll revolution of the 50s and 60s and features all their best-known chart hits including Big Girls Don’t Cry, Sherry, Can’t Take My Eyes Off You, Rag Doll, Let’s Hang On and, of course, Walk Like a Man itself.

Meanwhile Elton John: It’s a Little Bit Funny arrives at The Bowdon Rooms for a six-night run from July 19-24.

The show, written by Chris Burgess and starring Broadway and West End showman Martin Kaye, charts the incredible story of Elton John’s rollercoaster career from Pinner teenager to one of the most successful global singer-songwriters of all time.

Events through the summer also include performances by Westlife star Brian McFadden on July 25, swing band Dominic Halpern and the Honey B’s on August 6, and Atomic Kitten’s Natasha Hamilton on September 3.

And tickets are now also on sale for John Power who is among the big names queuing up to appear at the venue later this year.

The Liverpudlian singer-songwriter, musician and actor was the bassist with seminal 80s band The La’s and in the 90s went on to be the frontman of indie favourites Cast who had huge success with their acclaimed debut album All Change.

Power, who has also played John Lennon on stage and has forged a well-received solo music career alongside his work with Cast, will perform a set on November 4 which promises Bowdon Rooms’ audiences a fantastic evening of irresistible melodies from across his four-decade career.

Brothers Anthony and Edward Prophet took over the Edwardian Bowdon Rooms last year and used the Covid lockdown as an opportunity to extensively refurbish the historic building to further establish it as a real asset within the region’s live event scene.

As well as an extensive live events programme, The Bowdon Rooms is a popular wedding venue and hosts a range of clubs, societies and community classes including pilates, yoga, acting, dance, singing, and a choir for people with dementia.

“We’ve introduced a table ordering app so you can relax and be waited on throughout the evening. And it’s also great to have our clubs and societies, including our theatre groups, returning.

“Assuming the June 21 date for lifting more restrictions remains, we have an amazing summer ahead. In addition to the rescheduling of all the shows, we have 18 months of events and weddings scheduled.”