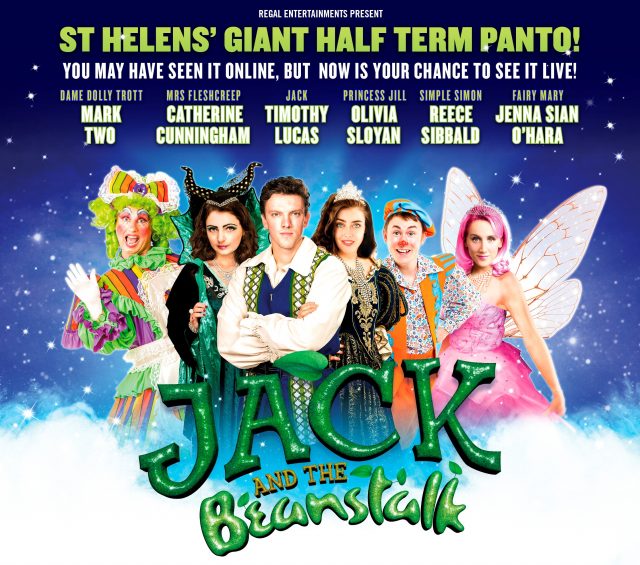 JACK AND THE BEANSTALK IS LIVE ON STAGE!

Leading Panto Producers, Regal Entertainments have announced they are bringing back their recent successful online panto to the stage at St Helens Theatre Royal to be enjoyed by audiences and performed LIVE on stage.

The lavish fairy-tale production of Jack and the Beanstalk will be live at the theatre for 15 performances from Thursday 21 October – Sunday 31 October 2021 and tickets are now on sale!

A cast of St Helens Theatre Royal favourites are coming together again to perform in the family favourite.

Jack and the Beanstalk tells the rags to riches story of a boy who sells the family’s cow for a handful of beans, getting him into a lot of trouble with his poor mother. But the story takes a magical twist when the beans sprout into a magnificent beanstalk that reaches up to a mystical land high in the sky.

Audiences will join Jack on his gigantic journey up the beanstalk as he discovers geese with golden eggs, a magic harp, and not forgetting a close encounter with a very hungry giant. But Jack needs to tread carefully, as the villainous Mrs Fleshcreep is hot on his heels, determined to stop him.

Theatre Manager Chantelle Nolan said: “It’s not long now before we allow our family audiences back in to the theatre to watch our spectacular pantomimes, we can’t wait. We had so much fun creating the lavish production of Jack and the Beanstalk over Easter, so much so, that we will bring it back for October half-term. Some of our audience members may have watched and enjoyed it online, now they have the chance to see it live at the theatre. But we also want to make sure that those who didn’t manage to catch it, can now see it live.

“There is no feeling like live theatre, the overall experience of going to a theatre to watch a show is unbeatable – Pantomime is an interactive show in its traditions and we are ready to welcome back our panto audiences.”

You may have seen it online, but now you can see it LIVE!!

Tickets can be booked online via the www.sthelenstheatreroyal.com website.

Jack and the Beanstalk