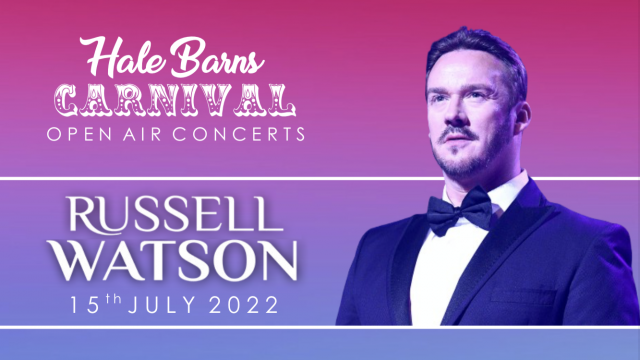 The singer dubbed the ‘the Voice’ is the best-selling classical artist of all time and has also been razzle dazzling British theatre audiences and critics alike this spring playing ruthless lawyer Billy Flynn on tour in smash hit Kander and Ebb musical Chicago, with reviewers describing him as “a sheer delight” and “a triumph”.

This year’s carnival takes place across the weekend of Friday 15 July, Saturday 16 July and Sunday 17 July 2022 – with the live music being extended to three evenings for the second time, reflecting the demand for tickets.

The Proms with Russell Watson officially opens Hale Barns Carnival 2022 on the evening of Friday 15 July.

The 55-year-old, who originally started singing in working men’s clubs in his spare time from his job as a bolt cutter, is the UK’s best-selling classical artist of all time.

His debut solo album The Voice, released in 2000, reached the number one chart spot – a position it held for a world record 52 weeks, catapulting him into the international spotlight.

He will be joined at Hale Barns by his band to perform a specially curated set full of Proms classics, including patriotic anthems like Jerusalem and Rule Britannia, and some of the world’s best-known operatic arias.

And support will come from String Infusion and rising star teenage soprano Millie Royle who is currently a student at Sale Grammar School.

Russell Watson said: “Last year’s Proms concert at Hale Barns Carnival was my first gig in 18 months, and it was such an emotional experience to be able to perform live, made extra special by the fact it was for a Hale Barns where I used to live.

“So when the carnival team asked if I would return for 2022, it didn’t take me long to say yes please!

“Once again I’ll be performing Proms favourites, along with a selection of the repertoire that I’ve recorded over the last 20 years.”

Tickets for the concert are on sale now.

The live concerts are once again complemented by a two-day free Hale Barns Carnival family event on the Saturday and Sunday (16 and 17 July).

This year the daytime programme will include a host of new attractions including Inflatable World – with a giant inflatable obstacle course; a 28ft rock climbing wall for adults and children giving a bird’s eye view of the festival site; The PartyBus soft play double decker, and a chance to test your skills in a special Football Academy.

Daytime entry is free from 12noon until 4pm.

Organiser Max Eden from Hale Barns Events said: “I’m really pleased to be able to welcome Russell Watson back to Hale Barns Carnival for 2022. He was a big hit with audiences last summer, so it’s guaranteed to be quite an evening this July.

“And of course, it’s just the start of the Carnival weekend with the Proms night kicking off three consecutive evenings of great music from some very special guests.”