Problem debt is putting stress on family relationships, damaging children and trapping families in a downward spiral of borrowing, according to The Debt Trap: Exposing the impact of problem debt on children, a new report from The Children’s Society and StepChange Debt Charity.

This new report – backed by the Archbishop of York – for the first time lifts the lid on the devastating impact debt can have on children. Their findings show that children are suffering worry and anxiety, bullying and going without essentials as their families are trapped in problem debt.

Household budgets up and down the country are under strain, but families with dependent children face extra pressures as they are more likely to face unexpected bills and are less able to cope with sudden financial shocks eg redundancy, reduced hours or illness.

As families begin to struggle financially, many feel that taking on credit is the only way to make ends meet – a third of all families have had to borrow money to pay for essentials for their children in the last year.

This often marks the beginning of the debt trap as credit repayments begin take up a larger proportion of income and families find themselves cutting back on essentials.

The charities are calling for changes to how creditors treat families with children who fall behind on bills and repayments. The government should review whether the protection for children against the harm caused by debt collection – including evictions, bailiffs and court action – is fit for purpose and consider developing a ‘breathing space’ scheme to give struggling families an extended period of protection from additional charges, further interest and enforcement action.

‘We cannot allow children to pay the price of debt’

The report calls on every council to create a debt collection strategy which takes into account the impact on families with children.

Regulators should make sure that creditors have ‘early warning systems’ in place, so they know when their customers are facing financial difficulties and offer advice and support. Earlier and wider access to debt support and advice could help families put the brakes on a downward cycle of debt and reduce the impact on children.

The report’s authors say that children should be learning about borrowing from their schools and families, rather than from advertising by lenders. The charities call for tighter restrictions on advertising to children, as well as piloting savings accounts for children through credit unions.

The report coincides with The Children’s Society’s launch of The Debt Trap, a campaign lifting the lid on the massive impact of debt on children’s lives.

The Archbishop of York, John Sentamu, who is supporting the report and campaign, said:

‘Parents living in poverty face incredibly difficult choices. What is to come first? Heating your home or putting food on the table? Many choose to go without themselves so they can provide the basics for their children. Parents want to make the best choices for their family, but low wages, expensive childcare and inflexible jobs make this very difficult.

‘When the monthly struggle to pay the bills becomes too much, often families think they have no option but to borrow money to provide the basics for their children. We need to make sure families living in poverty have somewhere to turn other than to usury-lenders.’

‘Families are increasingly relying on debt as a way to make ends meet – but we’re in danger of ignoring the impact this is having on children now and in the future. We cannot allow children to pay the price of debt.

‘With little savings to fall back on, it can take just one unexpected setback – like illness or being made redundant – to tip a family over the edge and into a debt trap that can feel impossible to escape from.

‘This research exposes the shocking reality of parents lying awake at night worrying and unhappy children going without. Many families are feeling the squeeze and parents struggling on low wages are battling just to pay the bills.’

‘This report is a stark warning to policymakers, creditors and the wider society of the devastating effects of debt on children. Families face a unique set of pressures, but the sad reality is that for many parents credit which is often unsustainable has become the only way to cover their essential household bills.

‘As parents become trapped in a toxic cycle of debt, children can become the unwitting victims. This is not acceptable in a society that aspires to justice and fairness.  We need concerted action to ensure financially vulnerable families are given ‘breathing space’ to help them get back on their feet and protect both children and families from the most harmful effects of debt.’ 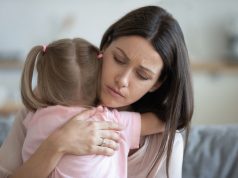 Millions of parents say they’d cancel Christmas if they could, most children fear an unhappy family time