Professional dancers have teamed up with Edge Hill alumni to inspire students to pursue their careers through a new psychological thriller.

Edge Hill University graduates were selected through a tough audition process to perform in The Shadow, a new production by Company Chameleon, an award-winning North West-based contemporary dance company, which premiered at HOME, Manchester before coming to the University’s Arts Centre.

Over three days students from Edge Hill were able to catch a glimpse behind the scenes of the company’s work through workshops, post-show discussions and dance analysis sessions.

Edge Hill graduates performed in the production alongside company dancer Theo Fapohunda, who graduated from the University with a first-class degree in 2014. His workshops with undergraduates focused on inspiring them to pursue their dream of becoming professional dancers.

The Manchester-based 26-year-old explained what motivated him to realise his ambition and gave aspiring dancers advice on how to succeed.

“I just really enjoy dancing, I enjoy moving; it’s that simple. I’d dance whether I was being paid to or not, so to do this for a living is just amazing.

“My advice to anyone who wants to do the same thing is to remember that you are an independent artist and you are unique.

“Develop your practise for you and be proud of your own personal achievements.”

Theo is one of six main characters in The Shadow, a dark, psychological thriller which uses an end-of-the-world hypothesis and Carl Jung’s model of the psyche to delve into the theme of unconscious desires.

Dance graduate Rachel Gittins, who plays one of the shadows, also danced in Company Chameleon’s 2017 production Illuminate alongside other Edge Hill students and alumni; she works as a freelance performer and dance teacher.

The 23-year-old from North Wales said: “I loved working with Company Chameleon last time so I was delighted to perform in The Shadow. Working on something like this, at a professional level, is your number one ambition when you train as a dancer.”

Edge Hill University has a long-standing relationship with Manchester-based Company Chameleon, which Michelle Man, Senior Lecturer in Dance, said was hugely beneficial and artistically enriching for graduates and students alike.

“Company Chameleon are real advocates for contemporary dance and that’s at the heart of what we do here at Edge Hill.

“The performance and workshops based on The Shadow have not only inspired our undergraduates but have given our graduates a platform to showcase their skill and expertise.

“It’s a great way of sharing dialogue on making that transition between graduating and getting into the industry; a lot of first-hand experience has been shared which empowers and motivates everyone involved.”

The Shadow completed its tour with a performance at Bath Spa University on Saturday 30 November. 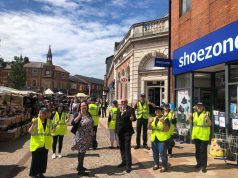