The life-saving work of critical care staff at Southport and Formby District General Hospital was recognised with a £5,498 donation from members of Southport and Ainsdale Golf Club.

At first, she thought it was food poisoning.  But, as her condition worsened, she was soon flown home where doctors struggled to identify the cause of her illness.

She was finally admitted to the critical care unit at Southport hospital after a tiny tear was found in her gut, the effect of which was poisoning her body.

Now very poorly, Linda’s family was told to expect the worst and she was put in an induced coma in an attempt to save her life. It lasted 81 days.

Thanks to what doctors told her  was her “mental strength” and the brilliant care of staff, Linda was nursed back to health and now plays golf two or three times a week.

This year, as ladies’ club captain, she combined with men’s captain Peter Darlington to raise funds for Critical Care on their respective charity days.

“I wouldn’t be here without the critical care team and I thought this was a good way of saying thank you,” said Linda.

Chief Operating Officer Steve Christian accepted a cheque on behalf of Southport and Ormskirk Hospitals Charity for the funds raised at a Christmas coffee morning for members at the Liverpool Road club in Ainsdale. 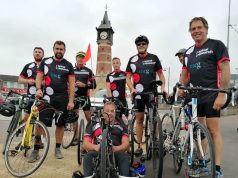