A man has been attacked and knocked unconscious by a robber as he was out walking his dog. The 45 year old was struck from behind as he was walking his Patterdale Terrier dog on ‘the Pits’ area of Colliery Wood, Winstanley, Wigan, at around 10.30am on Monday 26th May 2014. The man had just passed a person, who is thought to be responsible who was wearing a dark hooded top and blue jeans, when shortly afterwards he felt a nasty blow to the back of his head which knocked him to the floor.

As the man was lying unconscious on the floor, the thief went through his pockets and stole his wallet, which contained the man’s driver’s license and other identification. The man was then woken from his state of unconsciousness by his dog licking his face, after this the man managed to crawl to a nearby path where a member of the public spotted him and called an ambulance.

Greater Manchester Police were then called and an investigation has been launched. Officers have now made an appeal for anyone who has got any information to come forward.

Detective Constable Andy Pickles said ‘This is a popular area among dog walkers and I am hoping this appeal jogs the memory of someone who was out walking their dog that day who may have recognised a man wearing a dark hooded top and blue jeans. This was a cowardly, sneaky attack from behind on a man who was doing no more than out walking his dog. There was no provocation or argument; it was simply a senseless cowardly act of mindless aggression against the victim.

We need to find this man and ensure no-one else is targeted in this violent way, so I would appeal to anyone who has any information to come forward. This man is badly shaken up, as you can imagine. But if you have any information that could help us find him then it would least give him some semblance of justice so please do call us if you know anything.’

Anybody who has got any information should contact police on 101 or the independent charity Crimestoppers, anonymously, on 0800 555 111. 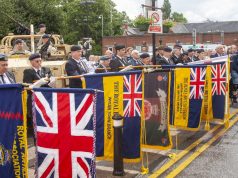 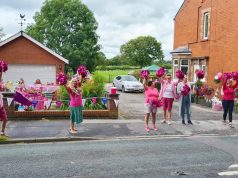 A blooming good donation for In Pink