Three consecutive months of price reductions on the UK’s forecourts came to a crashing halt in February as both petrol and diesel went up.

As a result of the February price rise, filling up an average 55-litre family car with petrol now costs £66.23 and with diesel £71.43.

The big four supermarkets only raised their prices slightly to 117p for unleaded (up 0.30p) and to 126.10p for diesel (up 0.48p). This was led by Asda, which after more than six weeks of keeping its prices the same, took the decision to pass on slight increases in wholesale prices to its customers.

The price rises were driven by a 5% jump in the price of oil which added $3 across the month taking the barrel price up to $65.13 by the close of February, although at one point it topped $67 – a price not seen since mid-November last year. The increase in the price of crude has been driven by production cuts made by OPEC (Organization of the Petroleum Exporting Countries) in partnership with Russia.

From a driver’s point of view, the oil price increase was softened a little by a 2% strengthening of the pound against the dollar, which is important as fuel, like oil, is traded in dollars. The pound started the month at $1.30 and closed at $1.33. The combination of the oil price rise and the slight strengthening of the pound led to the wholesale price of unleaded rising by under a penny (0.82p) a litre and diesel by 1.82p.

RAC fuel spokesman Simon Williams said: “Drivers will be disappointed to see prices at the pumps going up again after enjoying three months of reductions.

“What they probably aren’t aware of is that retailers, who held off cuts for weeks when they were warranted, instantly raised their prices when they saw the wholesale price go up very slightly. This is unfortunately clear proof of the infamous ‘rocket and feather’ pricing strategy where prices go up like a rocket and fall like a feather.

“Even the cheapest supermarket fuel retailer Asda which held its average petrol price at 113.7p since mid-January flinched, adding more than 1.5p a litre in four days. It will be interesting to see if this comes off again as the wholesale price eased almost straightaway.

“Currently, retailers should actually be reducing their unleaded prices a little, but it remains to be seen whether they will pass on the savings to drivers on the forecourt. Based on their current track record you would have to say this seems unlikely.”

London and the North East suffered the biggest rises in the price of unleaded, with 1.18p added on their forecourts. The South East had the dearest petrol at both the start and end of the month but only saw 0.71p go on to its average price. Wales saw the smallest increase and also had the cheapest petrol by the close of February.

London also endured the greatest increase in the price of diesel and had the most expensive price by the end of the month with a litre going up by 1.53p to 130.67p. At 1.28.18p Northern Ireland had the lowest price diesel in the UK. 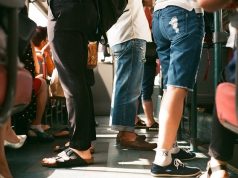 Public railways would be better value for commuters, says TUC