The Environment Agency’s Chief Executive Sir James Bevan has highlighted the need for a new approach in his keynote speech at the annual Flood and Coast Conference.

Over the next century a different approach is needed to protect the country from flooding, the Environment Agency’s Chief Executive said in a keynote speech at the annual Flood and Coast Conference today (Tuesday 20 March).

As he revealed that every £1 invested in new flood schemes saves the economy £10 in damages avoided, Sir James Bevan said that despite huge advances in flood protection, what worked so well in the past will not be enough in the future. Rising sea levels and higher populations in built-up areas will mean new approaches are needed to combat increasing flood risk. Since 2015, new flood schemes completed by the Environment Agency have benefitted more than 100,000 homes but to continue building on this success new 21st century approaches are needed.

These include a call for greater business investment, quicker emergency response and increased use of natural flood schemes, in addition to ‘hard’ defences, in order to reduce the impact of flooding on communities around the country. He questioned how these challenges should be dealt with and suggest that more concrete – simply building our flood defences higher and higher – is not the answer.

As he laid out his thoughts on the future of flood protection, Sir James Bevan said that tough questions had to be asked about what to protect. He questioned whether there might be a case for considering future funding priorities.

He said that everyone has a part to play to reduce flood risk and that homeowners in flood risk areas should know the risks and what action they can take – and he praised communities and flood groups who have already taken great steps in this area.

“Almost every day in this country, when rivers and tides rise, rain falls and storms blow, thousands of people sleep safe and unaware that they are being protected by flood defences.

“But what works so well now – and has done in the past – may not be enough in the future. Over the next fifty years if we are going to give the country the best possible protection against flooding, we are going to need a different approach.”

The Environment Agency manages flood risk on over 36,000 km of river, 9,000km raised flood defences and over 22,000 flood structures – from the Thames Barrier to local pumping stations. Since 2016, it has upgraded its response capability with more than 6,500 staff trained and ready to help protect communities when floods threaten, 40km of temporary barriers, 250 mobile pumps, and 500,000 sandbags. Partnerships to help respond during incidents have also been strengthened – including with the army.

Government is investing £2.6 billion in flood and coastal erosion risk management projects between 2015 and 2021.

Now in its third year, the annual Flood and Coast Conference brings together experts from across the globe to share ideas and opportunities to work together to tackle the risk of flooding and coastal erosion. More on the conference here: www.floodandcoast.com.

The Environment Agency is currently working in its next National Flood and Coastal Erosion Risk Management Strategy which will address these challenging questions raised in Sir James Bevan’s speech. 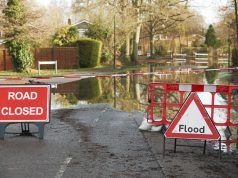