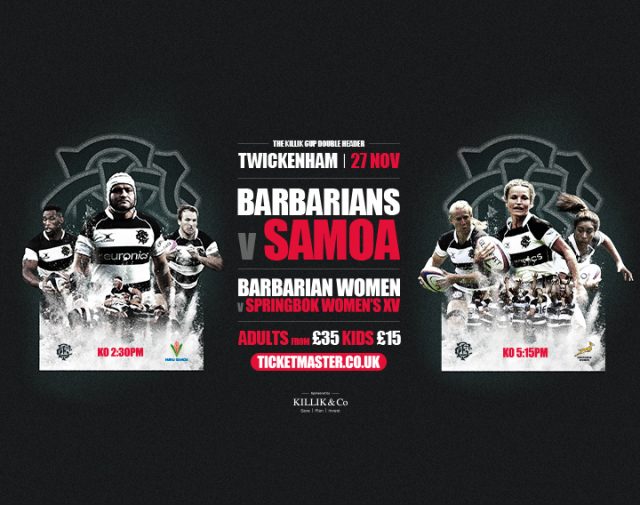 Today the Barbarians have announced Australian Head Coach, Dave Rennie and Wales Assistant Coach, Jonathan Humphreys will take charge of the Barbarians team against Samoa on the 27th November at Twickenham for the Killik Cup Double Header (K.O. 2.30pm). The two will be reunited in a coaching capacity after their successful time together at Glasgow Warriors from 2017 to 2020.

Three experienced world class players have also been confirmed to put on the Black and White shirt again; the 74 capped back rower and Argentine former Captain, Pablo Matera, who led the Pumas to a landmark first victory against the All Blacks in the 2020 Rugby Championship; the 54 capped Springbok number eight, Duane Vermeulen, who missed out on the victorious series against the British and Irish Lions due to injury; and finally, his fellow Springbok hooker Malcolm Marx – 38 Caps.

“Barbarian Coaches and Players announced for Samoa match at Twickenham”

All three have represented the Barbarians once before in matches at Twickenham. Duane in 2013 against Fiji, Pablo against England in 2015 and Malcolm more recently against Argentina in the 2018 nail-biting match that saw a last-minute drop goal seal victory for the Baa-Baas.

Dave Rennie remarked “It’s a huge honour to be invited to coach the Barbarians later this year and it should be a great occasion at Twickenham. The Barbarians are renowned for bringing together leading players from around the world, and the challenge for Coaches is moulding them quickly into a team that can play expansive entertaining rugby for the fans to enjoy.”

He continued, “Humphs is an excellent coach and I look forward to working with him again. We are in the process of assembling a great squad and delighted Duane, Pablo and Malcolm have all accepted to play. Further player announcements will be made in the coming weeks.”

Jonathan Humphreys also commented: “The Barbarians is steeped with so much history, especially in Wales with the 73 game and the Easter Tours. It is special to represent the club as a player, but to now coach them is an even greater responsibility.”

He continued, “I look forward to joining up with Dave and hopefully get the team to put in a special performance on the day and finish off the Autumn Internationals in style.”

A day of high-octane international rugby is expected at Twickenham in this historic double header event, with stars from around the globe representing both the men and women’s teams. Barbarian Women will take on a Springboks Women’s XV following the men’s match at 5.15pm.

The ticket price includes both matches and are selling fast, with a big crowd expected. Secure your seats early and be part of the action from *£35 for adults and kids *£15. Visit: www.ticketmaster.co.uk/barbarians

Hospitality packages are available to purchase from £119 per person via www.twickenhamstadium.com