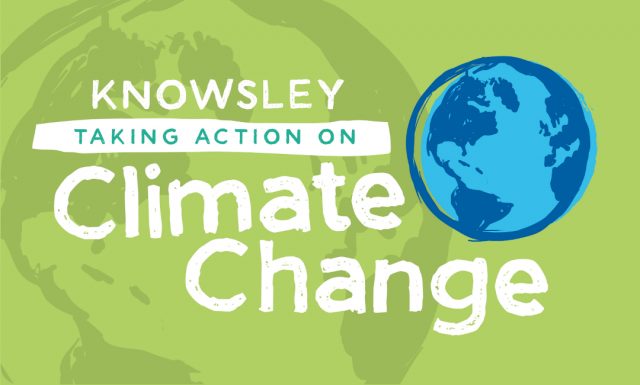 A programme of actions to mitigate the impact of climate change is now underway in Knowsley following the declaration of a climate emergency by councillors in the borough.

At the council meeting on Wednesday, 29 January 2020, Knowsley councillors agreed unanimously to make the official declaration, in response to current and predicted levels of global warming and the need to take immediate, local and significant action.

In making the Declaration of a Climate Emergency in Knowsley, councillors have agreed that the council will aim to reduce emissions from its own estate and services to net zero by 2040 – a full ten years before the Government’s own target.

Councillors have also committed to taking advice and considering the recommendations from the Carbon Trust, the Friends of the Earth and the Association of Public Service Excellence to inform the development of an action plan.  It is intended to implement those actions as soon as possible to achieve, where possible, net zero before 2040.

Cllr Shelley Powell, who put forward the Notice of Motion to formally declare a Climate Emergency in Knowsley, said: “It may sound alarming, but to formally acknowledge the challenge facing the climate as an ‘emergency’ is an important statement. It says we recognise and understand the scale and urgency of this challenge – and most importantly we are going to take robust, immediate and local action to address it.

“As councillors we felt strongly that when we made the Declaration of a Climate Emergency, it must be more than ‘just’ words. We wanted to back it up immediately with specific actions which will help us achieve some very ambitious goals.”

Knowsley’s Declaration of a Climate Emergency is in recognition of current levels of global warming and predictions of future warming, which need to be urgently addressed to prevent the potentially catastrophic impact on our world of doing nothing. Everyone has a part to play in this – from the top levels of Government right down to individuals. Local authorities like Knowsley have been declaring Climate Emergencies and setting their own targets for achieving net zero carbon emissions. Like the Liverpool City Region, Knowsley Council is aiming to achieve this by 2040, which is one full decade earlier than central Government’s own target as part of the UK’s obligations under the Paris Agreement.

Progress is already being made in Knowsley – the council has successfully reduced carbon emissions from its estate and services by 36% since 2009. Meanwhile borough wide carbon emissions have also fallen – by 28% in the same time. But, the Declaration of a Climate Change Emergency acknowledges that there is much more still to be done.

Regular updates on the work to reduce emissions in Knowsley will be shared on www.KnowsleyNews.co.uk and on Knowsley Council’s social media channels using #KnowsleyActsOnClimate. There will also be opportunities for businesses, organisations and individuals to get involved.