A new report by environment and transport groups including the Campaign to Protect Rural England and the Campaign for Better Transport is calling for £3 billion to be invested over the next five years in a range of ‘green retrofit’ improvements for existing roads in the upcoming Road Investment Strategy, which will be published by the Government this Autumn.

England has one of the lowest rates of bus use and cycling in the EU, while 3 million people are exposed to noise levels from roads above international standards and biodiversity continues to decline. The Bigger not better report outlines many ways our existing road network needs to be updated to help tackle these problems, including:

green bridges to reconnect habitats and landscapes that have been severed by major roads
design changes to reduce the visual and landscape impact of roads, including lighting
new barriers and better management to reduce traffic noise
safe crossings and routes to increase walking and cycling
new smart technology to help reduce disruption, through better speed control and information
priority measures for buses and coaches, particularly near key junctions and urban areas

“England’s roads are a generation behind countries like the Netherlands and not just in relation to cycle facilities. While the Dutch now have over 600 green bridges across their roads, a measure increasingly copied in Eastern Europe, we have barely a couple. Our motorways already have the most lanes on in Europe, so why is the Government still thinking of making them bigger still? This would not only be devastating for the countryside, it would make driving increasingly nerve-wracking for drivers.”

“The Government’s Road Investment Strategy needs to focus on how existing roads can be improved, not on building road capacity. Compared with £15 billion for new road capacity, £3 billion is a small amount to pay for the huge impact of cleaner, quieter roads, more efficient public transport and continuous green spaces. We need only look at Holland for inspiration, where hundreds of schemes have reduced the impact of roads and re-connected vital sections of countryside to benefit wildlife and people alike.”

The impact of these relatively small developments to the roads that currently cut through natural habitats and public pathways will be exponential for the surrounding residents, wildlife and public transport users, and will help make sustainable travel a more realistic choice for many.

“Millions of people visit National Parks every year, eager to experience their unique qualities, peace and tranquility but too often their enjoyment is spoilt by traffic noise and unsightly, dangerous roads. The measures in this brochure show how many of the negative impacts of existing roads could be reduced. Implementing this green retrofit programme would demonstrate that the Government takes its responsibility towards National Parks seriously.”

Gritters will be busy following forecast for ice and snow 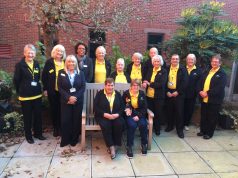