However, the Resolution Foundation pay projection shows that earnings growth is set to have returned to 0.1 per cent overall, and 0.2 per cent in the  private sector, in the three months to February.

This is set to be officially confirmed in next month’s official figures and will mark the end to the UK’s 12 month pay squeeze. Public sector pay is set to continue falling until new settlements are reached, with NHS workers set to be first in-line for an above-inflation pay rise later in 2018.

Despite this welcome news, average weekly earnings are still £15 a week lower than their pre-crisis peak in 2008.

“Britain’s 12-month pay squeeze has finally ended, though public sector workers will have to wait until new pay settlements are agreed across the NHS, schools, the police and other parts of the public sector.

“While it’s a relief that pay packets are no longer shrinking, the outlook for anaemic pay growth remains a huge living standards concern. Average pay is still lower than it was a decade ago, and an entire generation of young workers are still yet to experience the 3-4 per cent pay rises that were once the norm.” 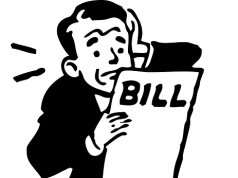 Post-lockdown increases in arrears on household bills worsened further in May, with no sign of recovery in incomes