Lancashire County Council’s cabinet member for highways and transport has paid tribute to the efforts of communities, councils and emergency services who helped to protect the county from the worst impacts of Storm Dennis.

The county council’s emergency planning and highways teams joined the huge efforts being made ahead of the storm to prepare for potential flooding following the weather warnings issued by the Met Office.

As part of the preparations and response to Storm Dennis, the council’s highways team in the Ribble Valley delivered 1,200 full sand bags to Whalley and Billington, with highways staff working alongside local residents to fill around 400 sand bags at the Whalley depot on Saturday. The highways team delivered another 400 empty bags to add to the resources available to the local Flood Action Group in preparing defences against possible river flooding.

Highways staff went on to work throughout the night on Saturday and late into Sunday until the storm abated, clearing fallen trees and attending flooding issues on the roads. The county council’s emergency planning team was also in action as part for the wider coordination effort involving the emergency services, Environment Agency, district councils and community volunteers.

Work will be ongoing in the coming days and weeks to clear drains blocked by flood debris, and repair retaining walls, roads and other infrastructure which has been damaged during the recent storms.

The county council’s flood risk management team is appealing for people to report any issues affecting roads and property during Storm Dennis and Storm Ciara the previous weekend. The team will be investigating the causes of flooding incidents to identify where repairs may still be required, which organisations need to be involved, and in particular where there may be opportunities to bid for funding for schemes to mitigate future flooding.

County Councillor Keith Iddon, cabinet member for highways and transport, said: “Once again our highways and emergency planning teams have played a vital role as part of the multi-emergency response to the severe weather this weekend.

“I’d like to thank them, along with the volunteers in the communities threatened by flooding, and staff from the emergency services and other agencies, for their work in helping to protect property, and respond to incidents during the storm.

“Since Storm Ciara hit the county last weekend our staff have been very busy dealing with the impacts, and planning for Storm Dennis, and again have done all they can to keep the county moving, and help those communities threatened by flooding.

“We hope there will now be quieter period as far as winter weather is concerned, to give them the opportunity to catch up with their usual daily duties, and begin the task of repairing some of the longer term issues caused by the stormy weather, such as damage to roads, bridges and other structures.

“Where there are ongoing problems, or repairs needed, I would ask people to bear with us while we schedule and carry out this work. I’d also ask people whose properties have been affected by flooding to report these issues to us, with as much detail as possible, so that all incidents can be included within the statutory flood investigation which we will carry out as the Lead Local Flood Authority for Lancashire.” 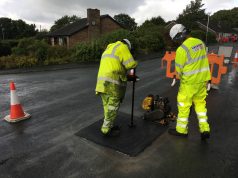 Join our fight against potholes by reporting them