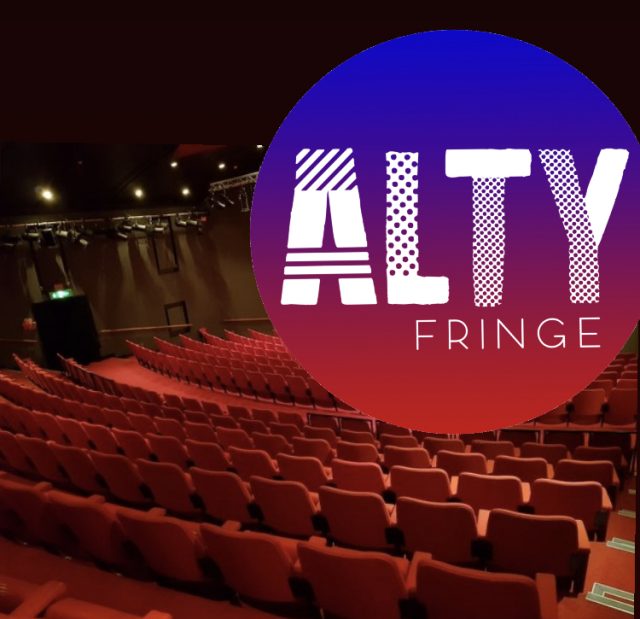 Andrew Lancel, Dillie Keane and Odyssey among the line up

Live Theatre returns to Manchester next month with a new Covid-Secure live arts event staged at the Altrincham Garrick Playhouse.

Alty Fringe will showcase the amazing talent from our region and beyond, with everything from live theatre, children’s shows, comedy, and live music. The festival was originally being staged from Monday 23rd to Sunday 29th November, however an extra week has now been added and will now end on Saturday 6 December with even more shows to be confirmed.

Event Organiser Max Eden has been working with the Altrincham Garrick Playhouse to bring live theatre and the arts back safely to the community, by staging the ‘Fringe Style’ series of events. Putting in place several Covid safety measures which include – reduced socially distanced capacity in the redesigned auditorium, one-way systems, hand sanitizer stations, along with other safety measures in the foyers and other areas.

The aim of the series is to show theatre can return safely and offer a platform for artists to perform in front of a live audience once again.

Following the announcement of disco legends Odyssey earlier this week, the first full weeks programme of entertainment has now been announced which includes Andrew Lancel in Swan Song, Fascinating Aida’s Dillie Keane, Something About Simon and The Very Best Of Tommy Cooper, the programme also includes children’s show Hurrah For The Pirate King.

Organiser Max Eden explains “I am absolutely delighted to announce the first full week’s line up for the inaugural Alty Fringe, we have something for all tastes and a high calibre of performers across the seven days.

“I wanted to create a new platform for the arts and live entertainment which could be enjoyed safely and have worked with the Garrick Theatre to ensure the visit is Covid-Secure and would like to re-assure everyone attending that will be a safe experience. That does mean we have limited seats on sale, so tickets are sure to go fast. Theatre is coming back, and I’m excited that not only do we have one week, but now two weeks of incredible performances, with the second week of shows announced very soon!”

The Very Best of Tommy Cooper – Monday night is comedy night with the multi-talented Daniel Taylor as comedy legend Tommy Cooper. The Very Best Of Tommy Cooper (Just like that!) is the follow up to the award winning The Tommy Cooper Show. He will focus the spotlight entirely on Tommy’s stand-up act offering all the misfiring magic, trademark one-liners and dazzling wordplay in this unmissable production!

‪Something About Simon – The Paul Simon Story – In a poignant evening of song, story and reminiscence, brilliant Liverpudlian singer-songwriter, Gary Edward Jones, honours the genius of Paul Simon. Weaving the unforgettable melodies with biography and cultural history, Jones leads us deep into Simon’s extraordinary life and straight to the heart of his music. Spanning seven decades from Garfunkel to Graceland, Jones holds his rapt, audience deftly in the palm of his hand. The show should have been playing off-Broadway this autumn and instead it entertains you in Altrincham.

Hi Sienna – Live in Concert – Hi Sienna are a female-fronted, alternative-pop band from Manchester, UK. Their unique song-writing, infectious melodies and boisterous live performances captivate audiences from start to finish. Last year they played some incredible gigs at Manchester’s Deaf Institute and O2 Ritz, supporting Scouting For Girls, whilst releasing 4 singles in between. All tracks are well-supported by the likes of BBC Manchester, BBC Introducing, Amazing Radio and XS Manchester. The band are set to release more music in the coming months and will take to the stage at a number of festivals including Liverpool Sound City, Hit The North and the mainstage at Bingley Weekender.

Greyhounds entwines Shakespeare’s famous story of ‘warlike Harry’ with the everyday trials and tribulations of small village life during World War Two. Whilst the war rages above them, the residents of Shuttlefield struggle to stage a production of Henry V to raise money for the local Spitfire fund. New writing combining a taste of Shakespeare, a touch of comedy and true vintage flair!

Swan Song by Jonathan Harvey, starring Andrew Lancel – It is Christmas time and forty-something Dave Titswell is a teacher with a crush, set in Liverpool in 1997. Life, love, and work – none are simple for Dave. Everyone knows someone like Dave – or could even be a Dave themselves. Will a school trip to The Lakes change things for the better, or make things decidedly worse? Swan Song will make audiences laugh, but equally pull at the heartstrings. SWAN SONG is a bittersweet comedy by award-winning writer Jonathan Harvey, first performed at the Edinburgh Festival and Hampstead Theatre. Directed by Noreen Kershaw. ★★★★ “A piece that is painstakingly crafted and superbly delivered” North West End

Hurrah For The Pirate King! – Direct from its Smash-Hit seasons at The Just So! Festivals (2018, 2019) and Liverpool Theatre Festival (2020), Follow the great Pirate King‘s Adventures as he takes us on a Magical and Musical journey to find a treasure beyond Gold and Jewels! Mysterious places shall ye see, Mateys! from Hushabye Mountain to Cat Island where the Queen of the Cats holds her Court, to mysterious and exciting places over the Briney Sea! With her help, can The Pirate King entice the legendary Unicorn, keeper of the magical Unicorn Diamond to appear? Buckle yer Swash ye Land-Lubbers! – experience Opera, Ballet and Art-Song in a fun and inclusive way designed for children and their grown-ups, from ages 0-99.

Hale Barns Carnival Presents ODYSSEY live in Concert – Disco Superstars, Odyssey are set to perform an intimate show at the Altrincham Garrick Theatre with a show filled with all their biggest hits including ‘Use it Up & Wear it Out’, ‘Native New Yorker’, ‘Inside Out’ and the iconic disco anthem, ‘Going Back to My Roots’.

They will be joined by special guest R&B star; Junior, who was one of the first British R&B artists to be successful in America with his incredible hit ‘Mama Used to Say’ which he’ll be performing live alongside his other hits including the duet ‘Another Step (Closer to You)’ originally recorded with Kim Wilde.

‪Fascinating Aida’s Dillie Keane – new solo show – After far too much bloody gardening leave (thank you Covid!), Dillie is back where she belongs – on a cabaret stage, accompanied by the marvellous Michael Roulston. Her take on life, love and government is cheerfully sour, gently savage and peculiarly mordant – but the beautiful music softens the effect. She freely admits she has a voice like a dying crow being crushed beneath an angry sheep, but that’s never stopped her. In fact, she will be singing some perfectly wonderful songs by other songwriters which she recently discovered in New York. As well as a raft of her own songs too, of course. A delightful evening.

For full information and to book visit www.altyfringe.co.uk

THE VERY BEST OF TOMMY COOPER

SOMETHING ABOUT SIMON – THE PAUL SIMON STORY

HURRAH FOR THE PIRATE KING!