Astronomers using ALMA and the VLT have discovered that both starburst galaxies in the early Universe and a star-forming region in a nearby galaxy contain a much higher proportion of massive stars than is found in more peaceful galaxies. These findings challenge current ideas about how galaxies evolved, changing our understanding of cosmic star-formation history and the build up of chemical elements.

Probing the distant Universe a team of scientists, led by University of Edinburgh astronomer Zhi-Yu Zhang, used the Atacama Large Millimeter/submillimeter Array (ALMA) to investigate the proportion of massive stars in four distant gas-rich starburst galaxies. These galaxies are seen when the Universe was much younger than it is now so the infant galaxies are unlikely to have undergone many previous episodes of star formation, which might otherwise have confused the results.

“Carbon and oxygen isotopes have different origins”, explains Zhang. “18O is produced more in massive stars, and 13C is produced more in low- to intermediate-mass stars.” Thanks to the new technique the team was able to peer through the dust in these galaxies and assess for the first time the masses of their stars.

The mass of a star is the most important factor determining how it will evolve. Massive stars shine brilliantly and have short lives and less massive ones, such as the Sun, shine more modestly for billions of years. Knowing the proportions of stars of different masses that are formed in galaxies therefore underpins astronomers’ understanding of the formation and evolution of galaxies throughout the history of the Universe. Consequently, it gives us crucial insights about the chemical elements available to form new stars and planets and, ultimately, the number of seed black holes that may coalesce to form the supermassive black holes that we see in the centres of many galaxies.

Co-author Donatella Romano from the INAF-Astrophysics and Space Science Observatory in Bologna explains what the team found: “The ratio of 18O to 13C was about 10 times higher in these starburst galaxies in the early Universe than it is in galaxies such as the Milky Way, meaning that there is a much higher proportion of massive stars within these starburst galaxies.”

The ALMA finding is consistent with another discovery in the local Universe. A team led by Fabian Schneider of the University of Oxford, UK, made spectroscopic measurements with ESO’s Very Large Telescope of 800 stars in the gigantic star-forming region 30 Doradus in the Large Magellanic Cloud in order to investigate the overall distribution of stellar ages and initial masses.

Schneider explained, “We found around 30% more stars with masses more than 30 times that of the Sun than expected, and about 70% more than expected above 60 solar masses. Our results challenge the previously predicted 150 solar mass limit for the maximum birth mass of stars and even suggest that stars could have birth masses up to 300 solar masses!”

Rob Ivison, co-author of the new ALMA paper, concludes: “Our findings lead us to question our understanding of cosmic history. Astronomers building models of the Universe must now go back to the drawing board, with yet more sophistication required.” 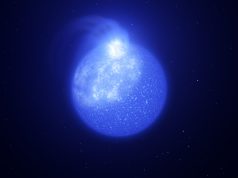 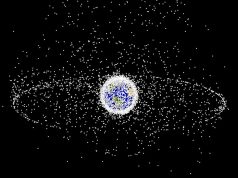 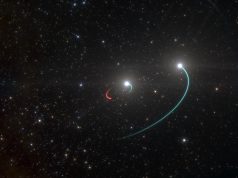