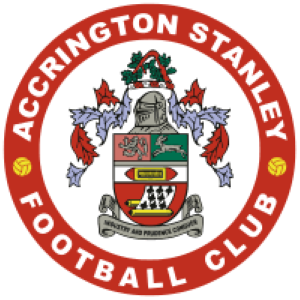 Accrington Stanley will visit the JMO on Saturday July 24th kick off 3pm.

The First Division side managed by John Coleman contains former United favourite Shaun McConville who scored 31 goals in 73 appearances between 2007-09, Dion Charles, who earlier this season made his international debut for Northern Ireland also has connections with United appearing on loan for “the Blues” in 2014.

Amongst the backroom staff will be Andy Gray, a well know figure in local footballing circles having played for Southport, Burscough and made his debut for Skem in August 1976 aged just 17. The Skelmersdale Reporter noted “A very bright prospect, made a very favourable impression”.

United have also added Stockport Town and Sefton Athletic to the list of games. Stockport, from the NWC Division 1 South Division, as you may remember ended our FA Vase journey at the first hurdle last season, whilst Sefton Athletic are members of the Liverpool County Premier League, both games will be away with the Stockport Town game being on Saturday June 26th KO 3pm and the Sefton game July 3rd (details to be announced).

The North West Counties season will begin on Saturday 31st July, with the fixtures hopefully released by the end of June.