Around the world, someone dies by suicide every 40 seconds. To raise awareness and to remember those that have died and are bereaved by suicide, people are being encouraged to participate in a 40 second silence across Lancashire and South Cumbria on 10 September at 11.40am.

In Lancashire and South Cumbria the suicide rates are the third highest in England (source). To address this, a partnership of NHS, local authority, police, public sector, education and businesses is working to reduce suicide and demonstrate that we all can make a difference.

World Suicide Prevention Day will mark the launch of a campaign to tackle male suicide. Let’s Talk to Prevent Male Suicide will encourage businesses and communities across Lancashire and South Cumbria to support managers, colleagues, family and friends to talk to prevent suicide. Suicide is a global phenomenon affecting everyone, but it is the biggest killer of men under age 49.

The concept of the 40 second silence was developed for World Suicide Prevention Day in 2018 by Tony Harrison, a father bereaved by suicide.

Tony, from Blackburn with Darwen, has been campaigning to raise awareness of suicide and to tackle the stigma and myths that surround it. He said:

“Most periods of silence last one or two minutes. This seemed a perfect opportunity to not only remember all those lost to suicide, but to highlight the horrifying statistic that every 40 seconds someone, somewhere around the world dies by suicide.”

To mark World Suicide Prevention Day and the 40 second silence, a logo has been designed by local tattoo artist Nathan Haworth. Tony said:

“Hopefully the logo will resonate with people and become instantly recognisable which in turn will raise awareness of suicide.”

Around the world, someone dies by suicide every 40 seconds. This equates to 3,000 a day or 800,000 people a year. For every suicide, there are 20 suicide attempts -one every 3 seconds.

“We know that suicide is a complex issue and it is vital for people to come together and recognise that suicide prevention is everyone’s business. Men are three times more likely to die by suicide than women – and listening is more powerful than you think.

“By bringing people together at Preston Flag Market, we hope to raise awareness and encourage people to talk about suicide.”

Together we can help to prevent suicide. If you’re struggling to cope then call Samaritans on 116 123.

Residents warned to beware of doorstep and phone scammers 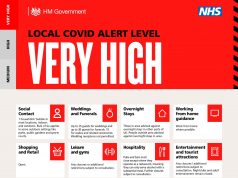